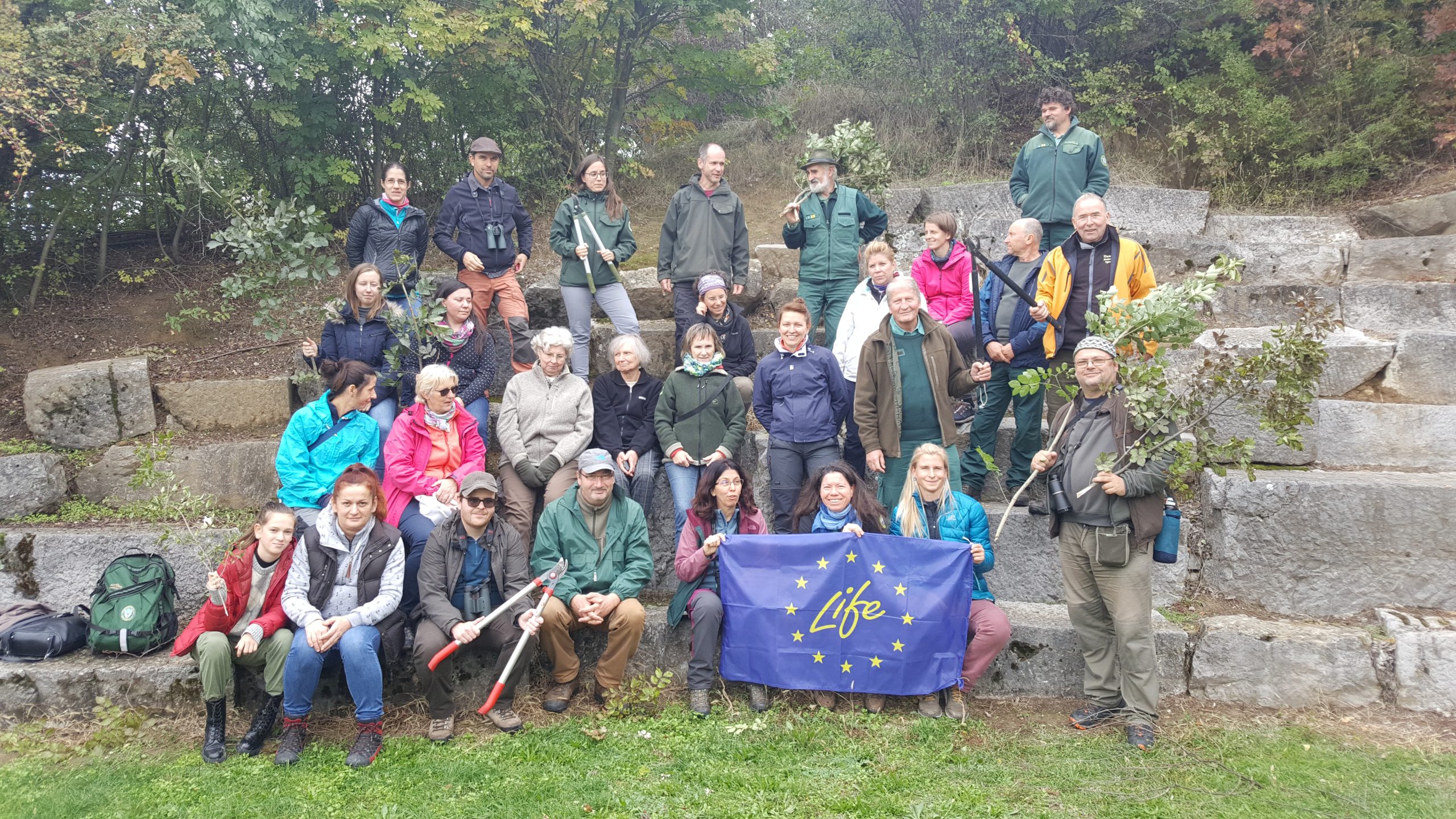 On 23 October 2021, an enthusiastic team of current and former DINPD staff members and their relatives devoted their Saturday morning to hands-on nature conservation at the Szársomlyó site of the LIFE endemic PANALP project. They cut down overgrown bushes and smaller trees on the most Southern habitat of the rare and vulnerable Vincetoxicum pannonicum.

Intensive farming on large areas literally erased life from the country. This is largely due to a poorly designed agricultural policy that encourages intensive farming, which creates a huge burden on the environment. Variety disappears from the rural landscape and with it also birdsong, butterflies and pollinators. If we lose the natural diversity of the landscape, we will also lose its health and resilience. 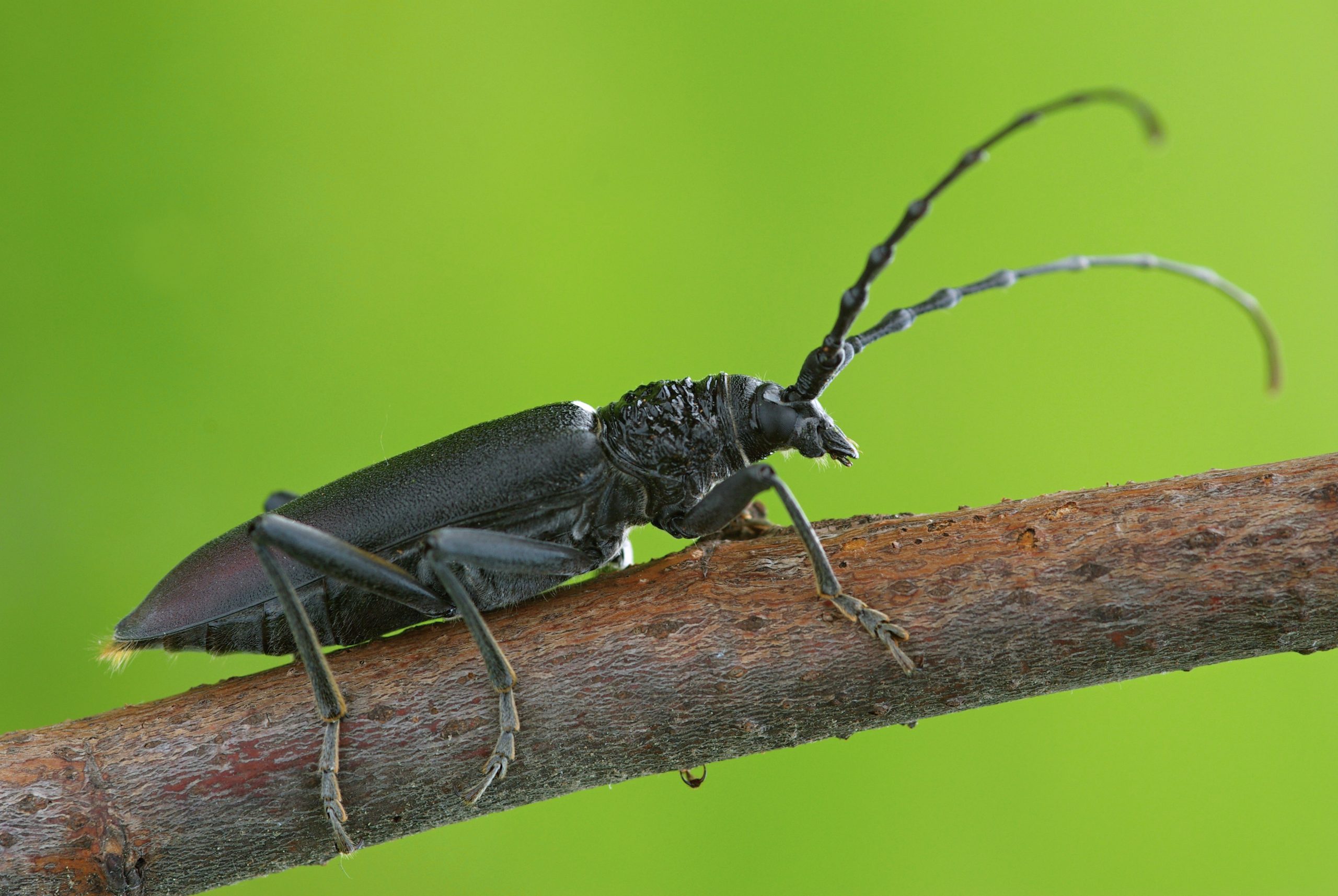 An international project is focusing on the return of pasture

The international project LIFE PANALP is focusing on the return of grazing as a tool for nature protection. Together with its Hungarian partners, the Regional Association for Nature Conservation and Sustainable Development (BROZ) will focus on the protection of several species of endemic plants and rare animals. 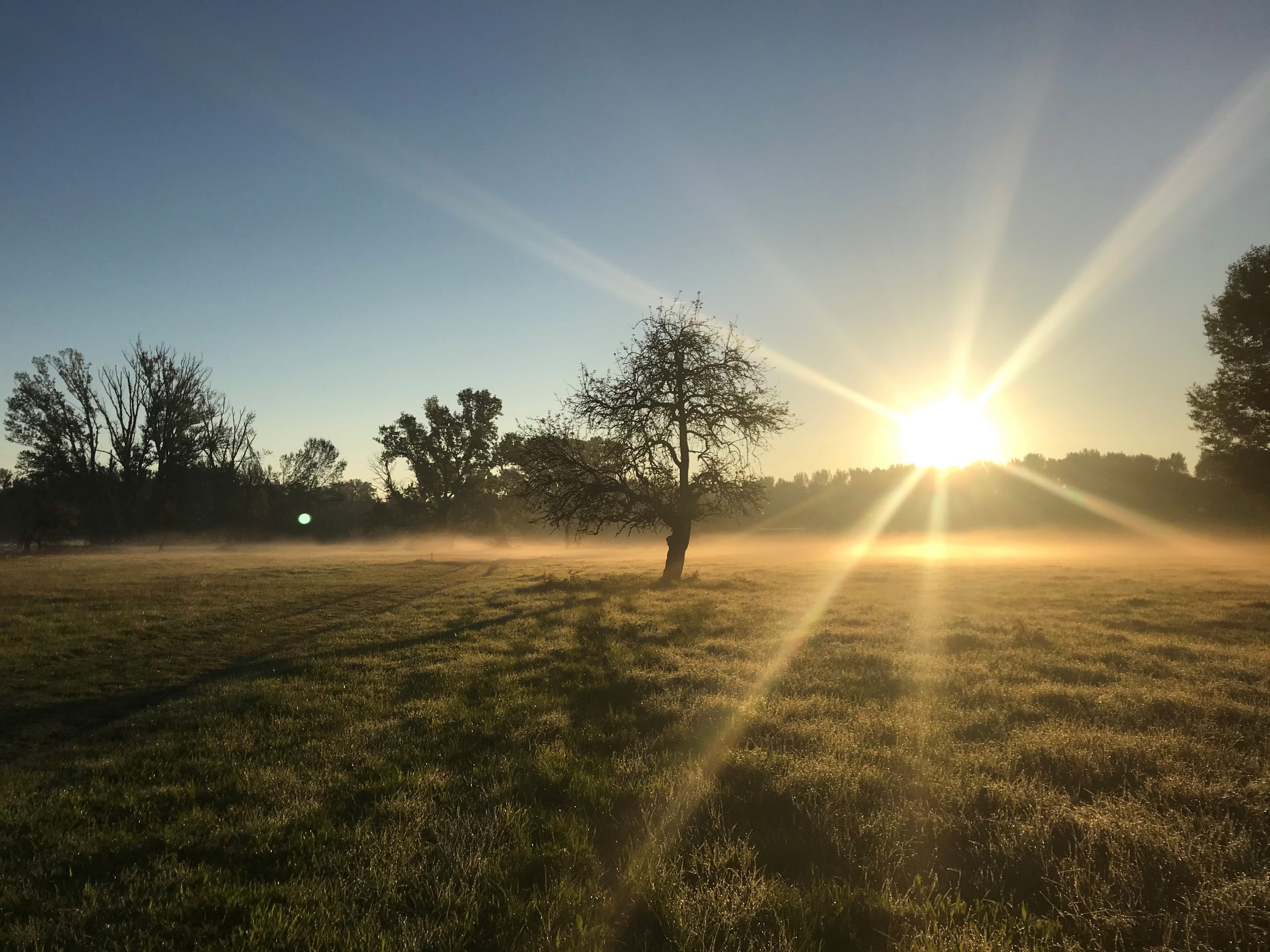 Conservationists, hunters and farmers are calling for landscaping 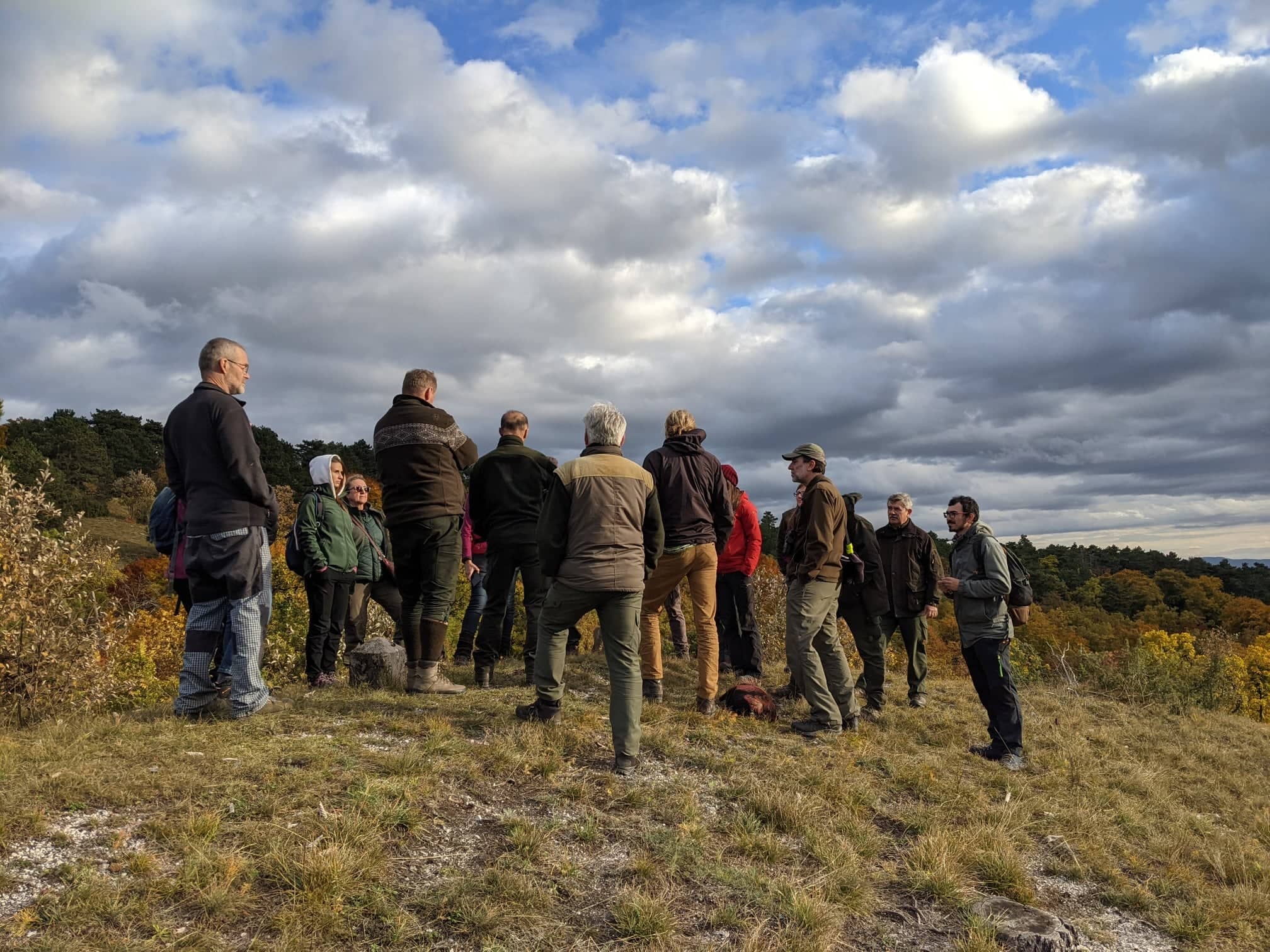 We organized a forestry excursion

Through appropriate management measures, the project will significantly contribute to the construction of the NATURA 2000 network in Slovakia, to the improvement of its functionality and the preservation of the natural heritage of the regions of Slovakia. In addition to improving the condition of the habitats in question, the aim of the project is to ensure sustainable care for the restored areas and to restore ecosystem services. A substantial part of the project’s activities will be implemented in cooperation with local farmers and communities, which will also bring significant socio-economic benefits and contribute to job creation in the regions. 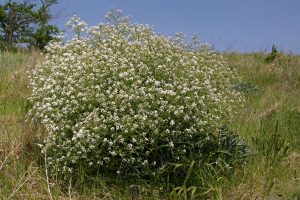 Steppe species, so-called “Steppe runner” reaching the western edge of its area in Pannonia. Endangered due to the decline of traditional management and overgrown sites. Target species in Hungary. 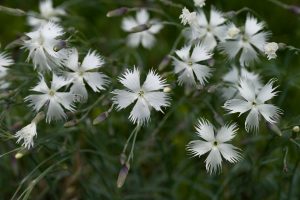 Endemic species widespread on rocky steppes on limestones, dolomites and volcanics in western Pannonia and in the foothills of the Carpathians. It is endangered especially by overgrowing of localities and the plantings of non-native trees. Target species in Slovakia. 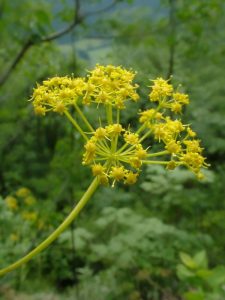 Pannonian endemic and relict, one of the rarest plants in Europe. The locality is threatened by mass tourism and the bite of numerous mouflons. The project covers 90% of the species’ population. Target species in Hungary. 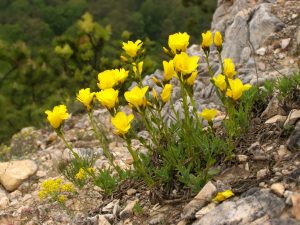 Endemic and pre-glacial relic with a limited occurrence of about 140 ha in the Szénás hills in Hungary. There has been recorded a downward trend in population size. The locality is threatened by trampling by visitors, damage by game and overgrowth by non-native black pine. 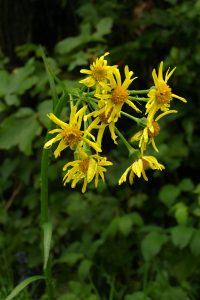 West Carpathian endemic with a small area and link to mowed meadows and forest edges, usually in steep or other not so accessible localities. Populations are declining and are threatened by the extinction of traditional farming, overgrowing of sites with woods, and partly by animal bites. 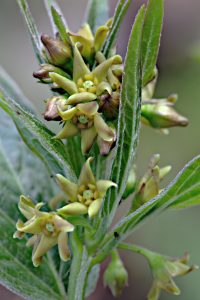 Pannonian endemic, the project will cover all of its sites in the three territories of European importance in Hungary. It is endangered by visitors, motorcyclists and overgrown sites with non-native black pine. 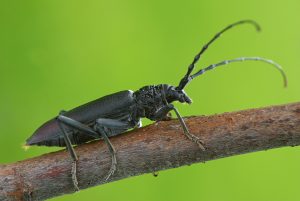 A species tied to old solitary dazzled oaks. Its habitats are disappearing due to the overgrowth of former pastures and the planting of non-native tree species (black pine). One of our biggest bugs. Males have very long tentacles – their length is greater than the rest of the body. 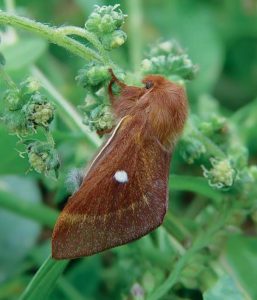 A species tied to a sparsely bushy slope and forest edges in lower, warm locations. It is especially threatened by overgrowing of localities due to the abandonment of grazing. Adult butterflies are active at night, but their presence can be detected by typical larval nests. Larvae are most common on sloes, hawthorns and wild pears. 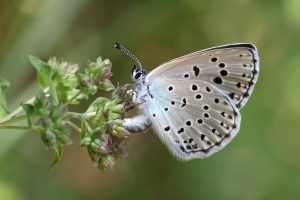 A species associated with dry extensively grazed steppe grasslands with scattered shrubs. It is threatened by overgrowing of habitats due to the abandonment of grazing and planting of non-native trees (black pine). The larvae are tied to the flowers of the Breckland thyme and oregano. They complete their development in the nests of ants (so-called myrmecophilia). 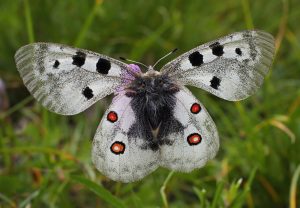 A species associated with the southern slopes with eroded, rocky areas with the occurrence of stonecrops. It is threatened by overgrowing of sites due to abandonment of grazing and secondary succession, as well as plantings of pines and other trees. 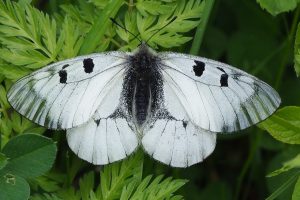 A species of mesophilic and drier grassland habitats and pastures on the edges of forests and forest meadows. It is threatened by the extinction of small forest meadows, overgrowth of forest edges with shrubs and planting of conifers. 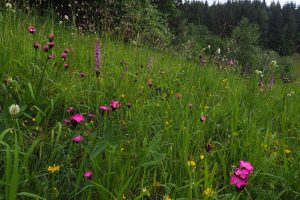 Very diverse communities with a dominance of thermophilic, xeromezophilic species of broadleaf grasses, sedges, perennial herbs, shrubs and semi-shrubs. Many localities are significant for the occurrence of species from the Orchidaceae family. In recent decades, these habitats have been gradually declining due to the cessation of traditional use, overgrown with shrubs, or monocultures of pines and other trees have been planted on them. Due to the great biodiversity of these communities, the occurrence of rare and biogeographically important species, it is necessary to maintain their sufficient representation and connectivity in the country. As relatively nutritious pastures, they are also of economic importance. 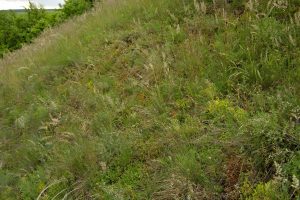 Xerophilic lawns with a predominance of narrow-leaved skeletons, perennial thermophilic herbs, shrubs, semi-shrubs and numerous spring-flowering terophytes. Typical steppe communities at the foot of the Carpathians and in Pannonia linked to drier and warmer areas or shallower and drier soils than communities of habitat type 6210 *. Due to the abandonment of grazing, secondary succession and planting of wood – often non-native black pine, habitats of these communities are gradually disappearing. They are a habitat for many rare species of plants and animals. 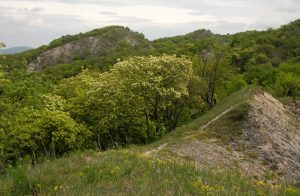 Rocky steppe communities on limestones and especially dolomites with the occurrence of dealpine (mountain) plant species, as well as a representation of various endemic species. As less productive, rocky habitats have often been planted with Scots pine, black pine and manno ash, which has severely damaged many sites. This habitat is targeted in the project only in Hungary. 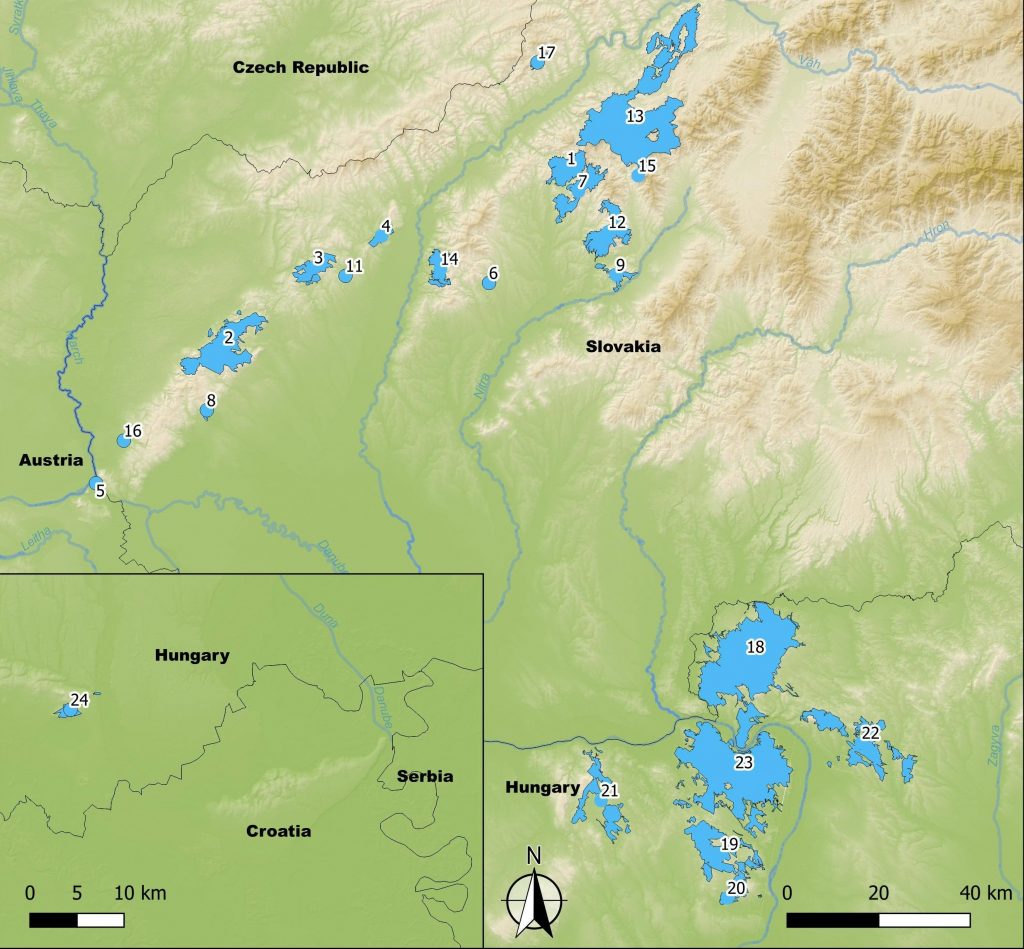 B. Purchase/lease of land and/or compensation payments for use rights

B1 Land purchase and long-term lease

D. Monitoring of the impact of the project actions

D1 Monitoring of project impact on target species and habitats

For more information about project species, habitats, but also about means of their protection and management, eventually, if you plan to do something similar on other sites, you can consult with our colleagues: